History of the Martin Petroglyph

In 1990, Robert B. Martin, Jr. and Donnie Martin, owners of the property, became aware of the damage being done to the bluff shelter site and agreed to donate the endangered artifacts to the University of Alabama Museums to prevent their imminent destruction. Four stones were removed from the shelter by the Alabama State Department of Conservation and stored at Joe Wheeler State Park until a permanent home could be found.

It was the wish of Mr. and Mrs. Robert Martin that this important cultural artifact, created by the Native Americans who inhabited northwest Alabama centuries ago, be treated with dignity and in such a way as to honor the culture of the people who produced it. Mr. Martin felt that the petroglyph should find a permanent home at the Tennessee Valley Museum of Art. After his untimely death, Mrs. Martin enthusiastically and generously supported her husband’s wishes, endorsing a proposal by the Colbert County Historical Landmarks Foundation to house the petroglyph at the Tennessee Valley Art Center in Tuscumbia. The Martin Petroglyph is an ancient and invaluable art form and an irreplaceable part of Alabama’s heritage.

The Martin Petroglyph and companion boulders were removed from their bluff shelter setting in Barton, Alabama in 1990 by the Alabama Department of Conservation and Natural Resources to protect them from vandalism. The stones are of great historical significance as they evidence human presence in the region of northwest Alabama that predates written history. Two of the stones have “glyphs”, carvings of human footprints and snakes. Three of the stones have mortar holes that were food-processing stations for the people who occupied the region anywhere from 600 to 1,000 years ago. Although the meaning of the “glyphs” remain shrouded in mystery, they speak to us of an age long gone by and of a people who can be viewed as “primitive” only in the light of century upon century of what we call progress. When viewed in the true light of objectivity, the petroglyphs are an elegant example of the most basic of human needs: that is to give record of one’s experience, and to share that experience for purposes from the aesthetic to the mundane, with those who would pass this place in a different time. 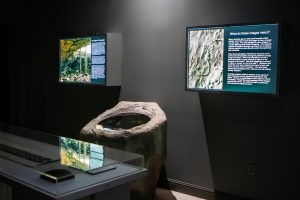 In exhibiting and properly interpreting these stone objects, it is of the utmost importance not to overlook the connection between the stones and the site in which they were found. The exhibition at the Tennessee Valley Museum of Art provides an appropriate context in which the artifacts might be considered. Equally important are exhibits of interpretive and associative value that have been developed and incorporated into the overall exhibition.

The exhibition is divided into two distinct and separate spaces connected by a single open doorway. One space houses the stones. This space is devoted entirely to the re-creation of a bluff overhang environment using a variety of techniques to simulate rock, foliage, terrain, and forest sounds. Hand painted murals create a diorama of the surrounding forest. The visitor is immersed in the experience of the bluff overhang site, with subtle lighting emphasizing the petroglyphs as the focal point of the exhibit. The adjacent exhibit space displays related exhibits of an interpretive nature that includes backlit photographic transparencies, text panels. A scale model of the original site from which the rocks were removed puts the petroglyphs in context. Three dimensional exhibits rotate and include artifacts such as clay, shell and copper adornments, stone carvings, projectile points and stone tools created by Paleo, Archaic, Woodland and/or Mississippian period native people who lived in northwest Alabama. 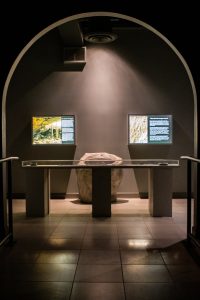 Given the scale of the setting and the space available, care was given to reconcile the two spaces with a constant eye towards authenticity. This approach included a bluff overhang at the semicircular end of the exhibit space recreated in such a way as to give the viewer the feeling of being underneath it when standing at the end of the walkway. Panoramic murals and three-dimensional elements (terrain, rocks, painted foliage, etc.) merge the foreground with the background. Nature sounds contributed to the authenticity of an outdoor setting.